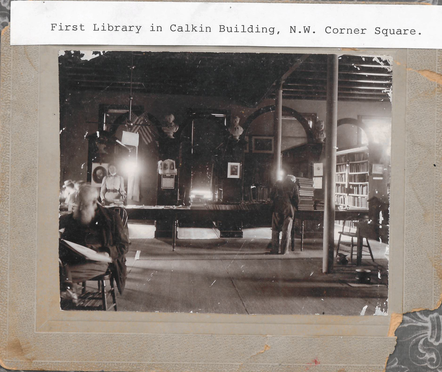 Early History - The First Carthage Library
A group of women known as the Columbian Society first proposed the idea of a public library for Carthage, Illinois.  Carthage City Ordinance number 36 was passed on September 11, 1893 stating:  “…there is hereby established and shall hereafter be maintained for the use and benefit of the inhabitants of said city  a Library which shall be forever free to the use of such inhabitants…”
After the ordinance was passed, attorney M.P. Berry offered to give $500 for the library if the townspeople would match his donation.  They succeeded in doing so.  John Culkin, of Culkin Clothing Company, gave the use of a room above his store on the Northwest corner of the square rent-free for one year.
The Columbian Society held many lectures and events to raise funds for the new library.  A community book drive was held and citizens donated many books.
The library first opened as a reading room on Feb. 14, 1894, and was open in the evenings with gentlemen from the society taking turns to supervise.
On March 10, 1894, the library opened to circulate books to the public.  Forty-three books were checked out on the first day of business.  The library was open on Saturday afternoons and evenings.
Mrs. Duane Pennock was the librarian, a post she held for thirty-two years.  Subsequent library directors include:  Julia Scofield, Abigail Davidson, Eva Swain, Dorothy Frazee, Martha Doellman, Janet Nicholas, Mary Downing, Michael Wold, Diana Robison, Susan Hunt, and Amy Gee. 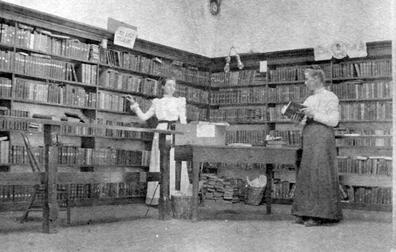 Picture from 1895 shows the librarian,
Elizabeth Pennock on the left,
​and Carrie Merrill. 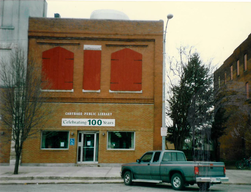 538 Wabash Avenue
After two years above the clothing store, in 1896 the library moved to a room above the city hall at 538 Wabash Avenue.   M.P. Berry then saw the need for bigger quarters and a lower level location for the library.   Mr. Berry offered to furnish the lower level of City Hall for the library if the City would donate the building to the library as a permanent home.   This offer was accepted and the library moved into the lower level in November of 1900.
In June & July 1924 the library was closed for several weeks so the books could be catalogued using the Dewey Decimal System.  At this time they also rearranged the shelves and installed new light fixtures.
On January 16, 1940 a fire damaged the library building and caused a loss of more than 6,000 books.  By April of that year, the library was back in operation.
In 1965, the building on the east side of the library, formerly used by the fire department, was remodeled.  The front was used for city offices and the library took possession of a large room in the rear of the building.  This gave the library about 2,865 feet on the main floor, with a room for programs upstairs.
The library was remodeled in 1983.  Improvements included a dropped ceiling, new lighting, new carpeting, shelving, and a new window in the children's area.
On December 17, 1990 the library officially became a library district.  On April 2, 1991 voters passed a referendum to expand the area served by the Carthage Public Library District to encompass the entire school district at that time, which is now the boundary of the Carthage Elementary School District.  As a district library, we are a taxing body with our own elected Board of Trustees.
The library remained at 538 Wabash until 2006. 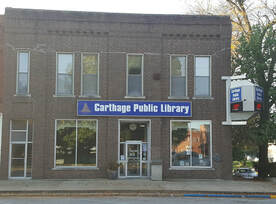 A New Building for the Library - 500 Wabash Avenue
On January 27, 2004, Marine Bank and Trust Co. of Carthage announced that they were donating their building on the southwest corner of the square to the Library.  The building at 500 Wabash Avenue was constructed around 1891 by the Mathews Bros. on the old Patterson House Hotel property.   The Mathew's Bros.Opera House, which first opened on Sept. 1, 1893, was located on the second floor.  The building has housed a furniture store, WCAZ radio station, a dentist’s office, a car dealership, a dry goods store, and a lawyer’s office.  It was the home of Marine Bank from 1920 until 2004.
The Library received possession of the building on Oct. 2005.  The library held several fundraisers and began a $285,000 project to renovate the first floor, and insert steel beams to support the second floor in anticipation of renovating the 2nd floor in the future.  The new location has approximately 9,400 square feet on two floors, with an elevator.
Hallett Movers assisted the library staff and numerous volunteers with the task of moving the shelving, books, and furnishings during the week of May 10-19, 2006.  The library re-opened in our new home on Tuesday, May 30, 2006. ​

Library Board Considers Facility Options for the future.

In 2006, when the Library remodeled the first floor of the former Marine Bank building and moved into 500 Wabash Ave., the plan was to eventually renovate the second floor.  The Board knew that we would be required to construct an additional stairway.  The Library is currently facing problems with an unreliable elevator, which is difficult to repair since the parts are obsolete, and is too small to meet ADA requirements.  Replacing the elevator would greatly add to the remodeling expenses.

In order to effectively evaluate our options, accurate cost estimates were needed.  In 2017 the Board of Trustees began working with Dr. Frederick Schlipf, a well-known and respected Library Building Consultant and professor at the U of I Graduate School of Library and Information Science in Urbana-Champaign, and Mark Misselhorn, from Apace Design + Architects in Peoria.

In March of 2018 Dr. Schlipf and Mark Misselhorn submitted a report to the Board of Trustees that summarized their findings and gave their recommendation.  Page 1 states:
"The library has four general options:
1.   Remodel the second story of the building to enable it to be used for library purposes, adding necessary staircase and
elevator.
2.  Expand the first floor by constructing an addition on the south.
3.  Obtain and remodel another old structure and convert it to library purposes.
4.  Build a new library building on a new site.
Our conclusion, outlined in detail below, is that the most economical and functional solution is to start over with a
new building designed as a library."

One Step Closer to a New Library Building

The Library's application for a Public Library Construction Act Grant to construct a new library building has been approved!  This is a matching grant with the State paying 51.19% of the costs.  The estimated cost for the entire project is $2,459,000.  The grant would cover slightly over half of that amount or $1,258,863.  The Library has until June 30, 2021 to raise our local cost share of $1,200,137.  Once our portion has been secured, then the grant funds will be awarded to us.

The plan is to build a 10,660 sq ft one-story building at First and Center Streets in Carthage.  Included in the plans are a large program/meeting space that could also be used by community groups, a drive up book return and pickup window, two study rooms, public access computers, and ample seating with electrical outlets throughout the building.

This is a wonderful opportunity to bring almost $1.26 million of grant funds into our community.  We realize that raising our $1.2 million share will be a challenge, and we will need the community's support.

Renovating the second floor of the current building, with a new elevator and stairway to meet safety codes, would also cost over $1.2 million, plus the cost of replacing air conditioners and carpeting on the first floor.  There would also be increased operating expenses for staffing both floors and the ongoing expense of an elevator maintenance contract.

This has been a long journey.  In 2012 the Library applied for a Public Library Construction Act Grant to remodel the second floor of the current building and build the required stair tower.  Although our project was approved, the grant money available was not sufficient to fund all of the applications , so we did not receive a grant.  We continued to resubmit our application each Spring.

In 2016, after learning that the elevator would need to be replaced, we convened a Focus Group of community members and consulted a Library Building Consultant and an Architect to evaluate our options.  (See "Library Board Considers Facility Options" below.)  Based upon their conclusion that constructing a new one-story building designed to be a library would be the most economical and functional solution, we revised our grant application.

In the March of 2018, the application we submitted for a Public Library Construction Act Grant, was to build a new 10,000 ft library building, at an estimated cost of $2,459,000.  At that time, and when we resubmitted the application in March 2019, there were no funds allocated for the grant program.  However, that changed during 2019 and in December of that year the State Library informed us that funds had been appropriated for the Grant program.  Our application would be considered for funding for the 2019-20 grant cycle if we could submit all of the supporting documents, including schematics and floor plans, by March 31, 2020.

The Library Board again worked with architects from ApaceDesign Architects + Engineers in Peoria to design a new library and prepare all of the necessary documents.  Then we waited throughout the quarantine.  Finally, on July 29, 2020 we received a phone call from the State Library informing us that our application had been approved.

Now we begin the next segment of our journey - raising our share of the expenses so the grant funds can be awarded to us.

The Library Board placed a bond proposition on the April 6, 2021 ballot. The issue passed 358 yes to 333 no!  The funds from the bond sales will prove to the State Library that we have raised our local cost share, so we will receive the grant funding, and are able to proceed with the construction plans.

Fundraising efforts continue to involve the community in the project, to help cover the increased cost of materials and labor, and to purchase new furnishings for the building.